The Interference Ensemble is a loose group of artists and musicians who are creating dynamic, live artworks rooted in our community in rural Ontario. We use a studio-centred, transmedia approach that alternates between spontaneous improvisation and rigorous, formal explorations.

Our normal practice is a persistent condition of experimentation and risk taking, where we manipulate the limits and intersections between video projection, live performance, object making, presentation space and the viewer experience. We have presented in hockey arenas, Christmas parades, online livestreams, industrials spaces, roadsides, galleries and festivals. We have invited the audience to sit, stand, walk, mingle and even follow us around the block banging on drums. As artists working in a rural context with an active and engaged audience, we constantly reinvent and reconsider the dynamic tensions that prevail between artist, artwork, venue and viewer. In this way we seek to invigorate that space between the watcher and the watched.

We are committed to collaborating with a raft of like-minded artists and musicians. In the midst of the pandemic lockdown, the contours of our need for collaboration became more stark. We challenge both artists and non-artists who work with us to contribute beyond their own expectations, enhancing and expanding our experimental vocabulary.

The ensemble was started by Geoffrey Shea and Tony Massett in 2014. 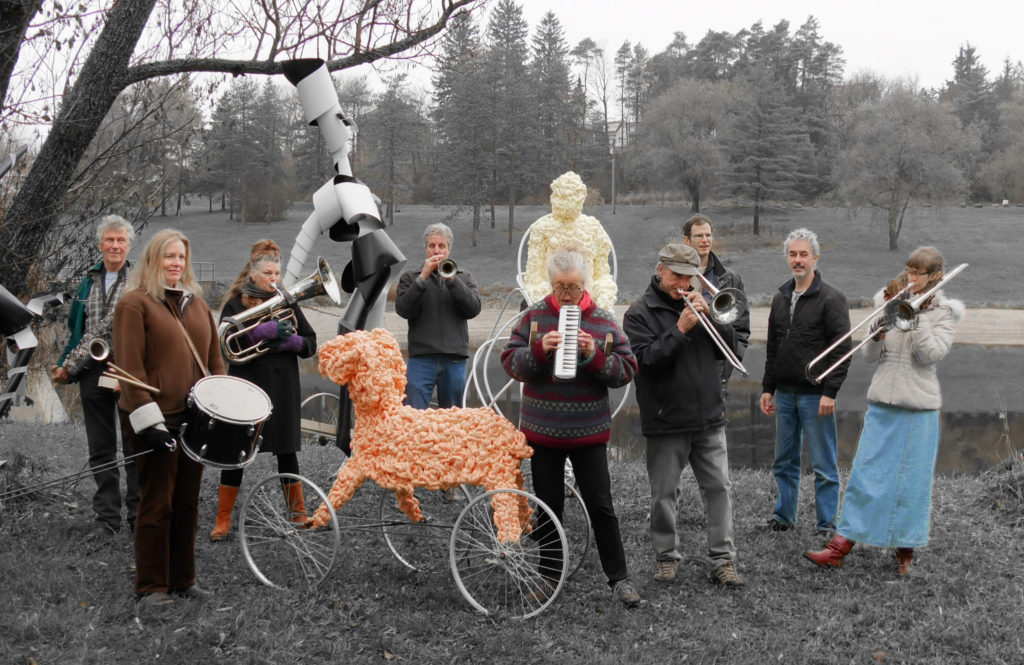 Tony is a visual artist, a former curator at the Durham Art Gallery and the founder  of the Fabulous Festival of Fringe Film. He has programmed and commissioned numerous artworks and events that pushed the boundaries of art presentation, including commissioning site-specific works by Lyla Rye, Max Streicher, John Dickson, Eric Glavin, Myfanwy MacLeod, Shelly Bahl, Michelle Gay and John Greyson. He has been working figuratively in marble for the last three years and comes to video in an inquiry which explores the objecthood of the projection surface: where the transformative nature of projections and their relationship to an object assumes a subtle theatricality.

Geoffrey is a media artist whose work operates at the intersection of community and identity. Working primarily in video, music, performance and installation, his work uses poetics to exemplify the impossibility of connecting by other means. Shea has written country songs, municipal bylaws, prayers and other forms of coded communication, and coupled them with unexpected imagery in an effort to arouse bonds and commonality. He was a founder of InterAccess, the video journal Diderot and the Common Pulse Media Art Festival. He has curated numerous exhibitions and film/video programs, and is an Associate Professor at OCAD University, where he teaches part-time.

Current and past collaborators with the Interference Ensemble include: